Native to the planet Krypton, where he was known as Fayna Zor-El, is one of the few survivors of the destruction thereof, together with her cousin Jod-El (Supermacho). When he was found by Jod-El, was a businesswoman named Karen Star, as Power Girl was a member of All Star Squadron and the Justice Society of America. Now he is fighting against the evil Count reside in the city, Coñópolis. 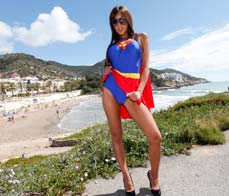